skip to main | skip to sidebar
The idea behind this blog is to educate/help/enlighten and not to create controversy or to incite. The opinions and views expressed on this blog are purely personal. Please be soft in your language, respect Copyrights and provide credits/links wherever possible.The blog team indemnifies itself of any legal issues that may arise out of any information/ views posted by anyone on the blog. E-mail: gavinivn@gmail.com 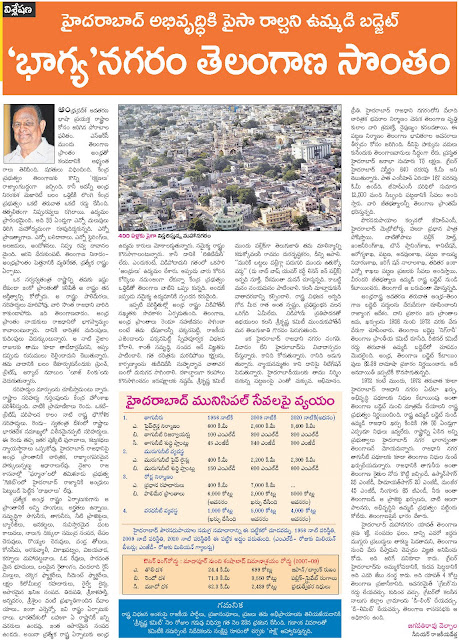 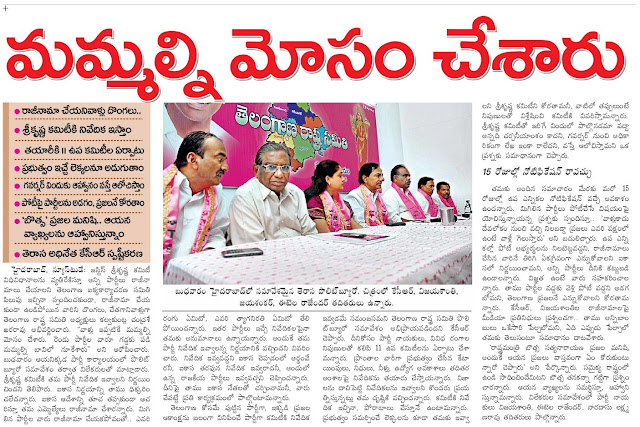 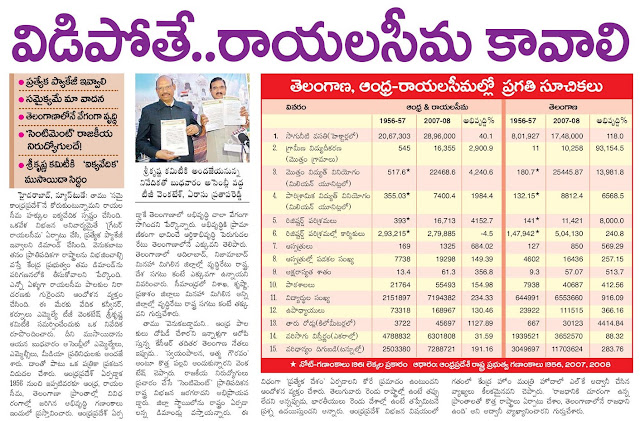 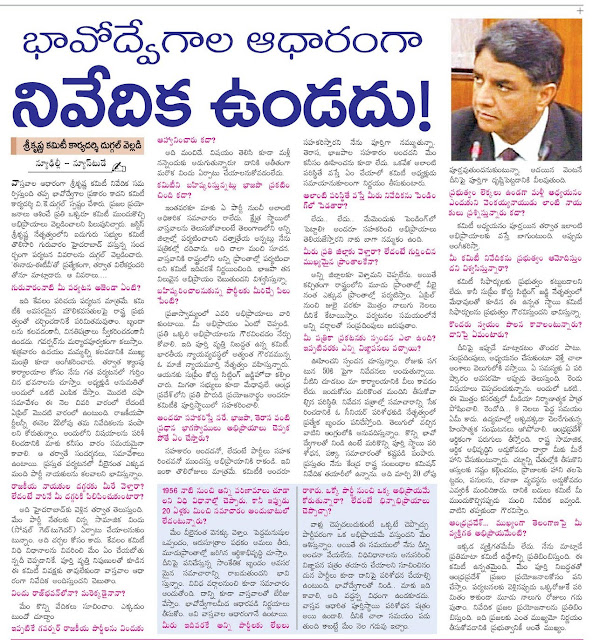 (source-eenaadu)
Posted by Gavini VN at 8:28 AM No comments:

Villagers give up liquor for T - 69,000 Singareni employees to strike work today

Khilashapur (Warangal): The 500-odd villagers are saying cheers,setting aside the bottle of liquor. Angry with the wishy-washy promises on Telangana,the people of the small village of Khilashapur in Raghunathapally mandal have taken an oath not to consume alcohol till the dream of a separate state is realised. Around 100 tipplers assembled at the village centre on the night of Feb 28 and took the oath in the name of their wives and children.They even gave an undertaking in writing.We have resolved not to consume liquor and pay taxes to the (united) Andhra Pradesh government till Telangana is carved out, said a 35-year-old farmer,Mohd Akram.The self-imposed ban on alcohol would mean revenue loss for the government and for arrack contractors.The village,inhabited by Gouds and Munnuru Kapus,chalked out this non-cooperation movement to achieve the larger goal of T-state. It all started when a Hyderabad based software engineer K Narasimha Raju,who hails from the village,convinced the people that it was ethically wrong on their part to consume liquor and contribute to the state exchequer when young students were fighting and even committing suicide for the T-cause.The idea of total ban on liquor came about mainly because of the strong local sentiments on the T-issue,he said. Freeing the village from alcohol alone wasnt my goal.You cannot organise people for short-term objectives.I had told them to set their own goals and naturally,alcohol was the first thing they banished, Raju told TOI.A plumber Mehmood Pasha said the people of T-region contribute a lions share to the excise department due to their guzzling habit.

The villagers say the anti-liquor movement spearheaded by women had shaken the establishment during the prohibition period.Andhra and Rayalaseema leaders always dub us as drunkards.By desisting from liquor,we want to prove them wrong, said a farmer Muttadi Ramulu,50.With arrack vends shutting down in the village,the movement has made an impact already. Motivated by the Khilashapur example,more villages are likely to join the movement,claim T-protagonists. We hope people of other villages will be inspired and emulate us by not consuming liquor,thereby not contributing to the exchequer, village elder Jitte Venkataiah said.Those violating the oath would be paraded on a donkey with their faces blackened.
The embarrassment would keep the menfolk away from liquor, he reasoned.Asserting that there wont be any complacency,locals inform that their village is famous for its pourusham (valour).It was here the legendary Sarvai Papa Rayudu (Papanna ) took on the mighty Mughal dynasty in the 16th century. Papanna fought for swayam paripalana (self-rule ) and swarajyam (total freedom) in those days, said Venkataiah.Its the achievement of the whole village,not that of any single individual.We have suffered enough and we will certainly take the T-movement forward, he added.
=============================
Adilabad: The 69,000 employees of Singareni Collieries will go on a days strike on Thursday in protest against the visit of Srikrishna Committee to the state.The stir would result in a loss of Rs 15 crore in all the underground and opencast mines spread in four Telangana districts of Karimnagar, Khammam, Adilabad and Warangal. Sources said the Singareni employees Telangana Joint Action Committee (JAC) took the decision on Wednesday to observe the strike in the entire coal belt area.Speaking to TOI,former Chennur MLA Nallala Odelu of TRS warned that the coal miners would not hesitate to go on an indefinite strike if the Centre continued to drag its feet on the separate Telangana issue.The miners are expressing their anger by staying away from duties on the day when the Srikrishna committee is scheduled to visit Hyderabad to begin consultations on the statehood issue, he said. A Singareni emplo-yee,L Madhunaiah,said they would intensify the agitation to achieve the long-standing dream of T-state.
========================
(source-toi)
Posted by Gavini VN at 8:01 AM 1 comment:

Hyderabad: In a development that can further fuel the Telangana movement presently splintered on political lines,it turns out that there are at least five ministers in CM K Rosaiahs cabinet ready to back colleague Botsa Satyanarayanas demand for bifurcation. Panchayati raj minister Botsa told TOI on Tuesday: I am not alone in advocating the two-state theory.I said whatever I wanted to say with all sincerity.Let others debate what I said.I want to keep quiet for a couple of days. Congress sources said the five ministers all from coastal areas and representing a combination of castes (2 Kapus,2 BCs and 1 Dalit) are hesitant to come out in the open.Being junior,they apprehend that seniors and those supporting a unified AP will make life difficult for them if they become vocal, said a party leader.

According to Botsa supporters,he has received some backing from his caste brethren from the region which has been under the influence of the Samaikhya Andhra movement.Apart from ministers,several MLAs from the region have supported the minister, claimed a source close to Botsa. According to the ministers backers,the support for Botsa is strong in Guntur,Krishna,East and West Godavari apart from north coastal Andhra.Many people from Krishna-Guntur feel the movement for a united AP is denying the region a chance to have its own capital,which could open avenues for development, claims a leader.


Hyderabad: Telangana Joint Action Committee (T-JAC ) members have demanded that the Board of Intermediate Education (BIE) should not send answer papers of Telangana students to Andhra and Rayalaseema regions for valuation.They said that the evaluators might not be objective in awarding marks to Telangana students if regional sentiment came into play. Representatives of BJP,TDP and TRS lead by T-JAC convener Kodandaram met G Balaramaiah,secretary,BIE,here on Tuesday.In a petition submitted to him,the JAC members said that some students from the region overwhelmed by the movement might be tempted to write Jai Telangana slogan on their answer papers and reveal their nativity to evaluators from the Andhra region.The students might be penalised for wearing their regional sentiments on their sleeves.If the answer papers of Telangana students are evaluated by experts from the same region then such a problem would not arise, the petition contended.Telangana activists and junior college lecturers associations from the Telangana region had put forth the same argument around one and half months ago.

The board had submitted a report a month ago on the demand of the agitators.The government has not replied to it so far, Balaramaiah said.He,however,added that he would forward the requests of the T-JAC to the minister for secondary education. When asked about the risks of sending answer papers from one region to another,he allayed any such fears and said the chance of evaluators identifying their origin was remote.The district code will be removed and hence from which district the answer papers have come will remain confidential.So,there is no need for people to worry, Balaramaiah assured.

A youth tried to commit suicide at Ganeshnagar of Jagityal mandal on Tuesday over the delay in formation of Telangana state.Agulla Veeraswamy,27,poured kerosene on himself and lit the match before jumping into his agricultural well.Veeraswamys condition is critical as he suffered 60 per cent burns.TNN


Students of Acharya N G Ranga Agricultural University (Angrau) on Tuesday tried to prevent governor E S L Narasimhan from attending the vice-chancellors conference organised at their university premises here.The governor was stopped at the entrance of the university by the slogan-shouting students.The students demanded that the governor support Tcause.With around 50 students surrounding Narasimhan, police personnel had a tough time in taking him to the meeting venue.The governor,however,refused to interact with the students,15 of whom were arrested.TNN
=============================
(source-toi)
Posted by Gavini VN at 7:47 AM No comments: 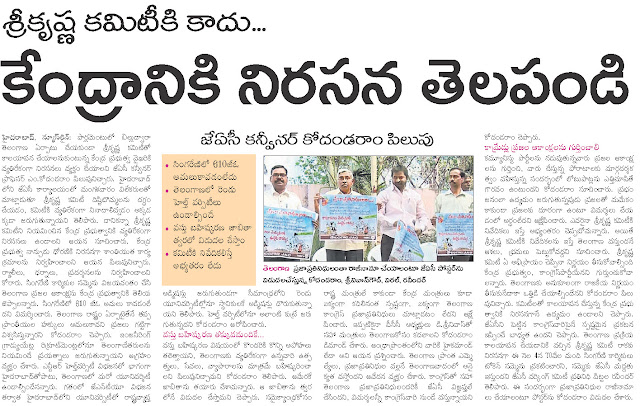 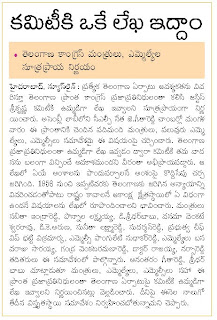 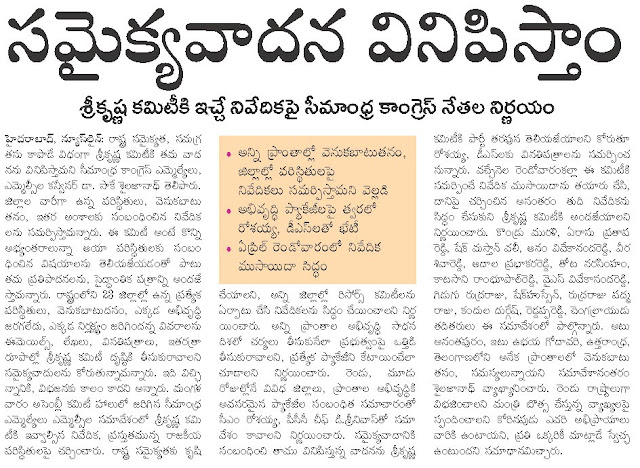 (source-saakshi)
Posted by Gavini VN at 6:57 AM No comments: 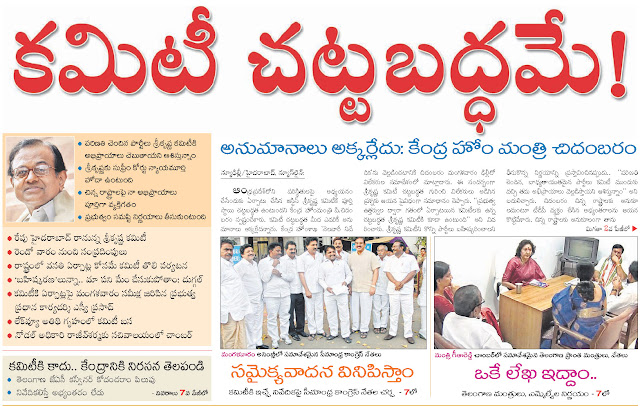 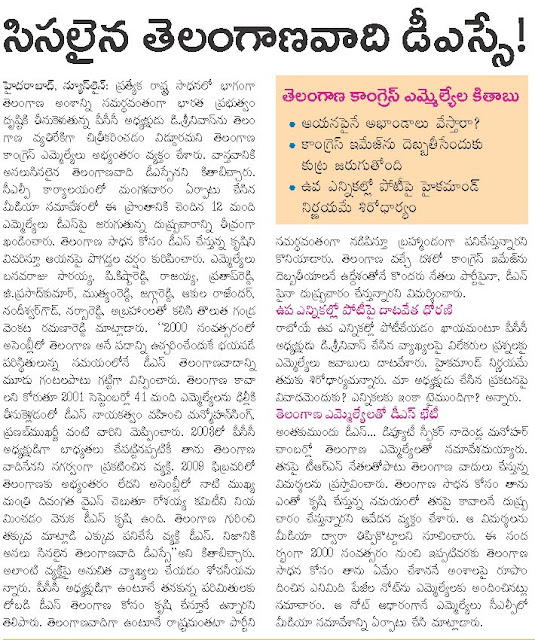 (source-saakshi)
Posted by Gavini VN at 6:30 AM No comments: 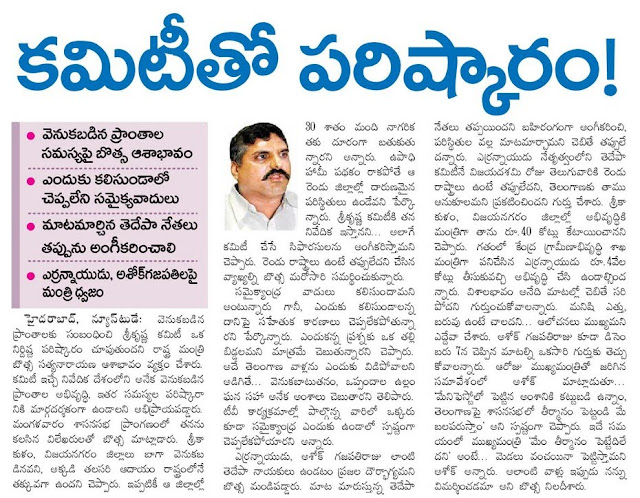 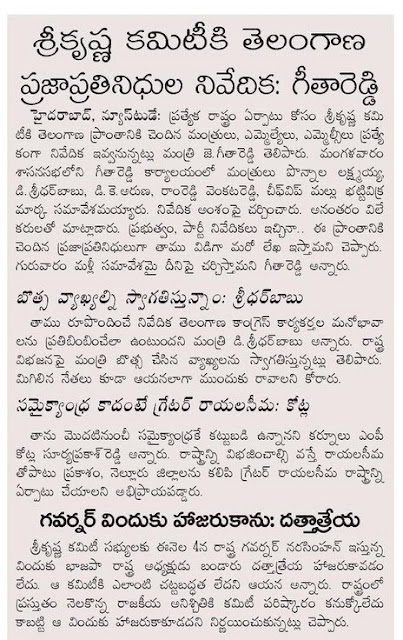 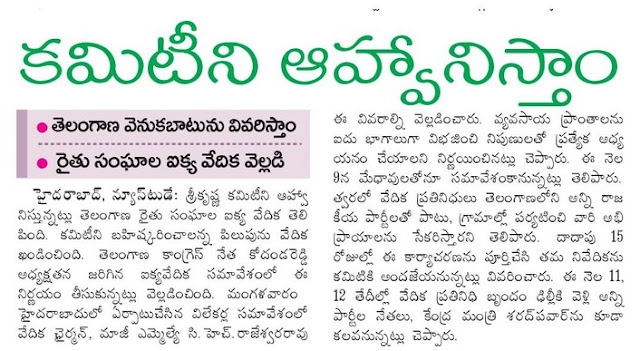 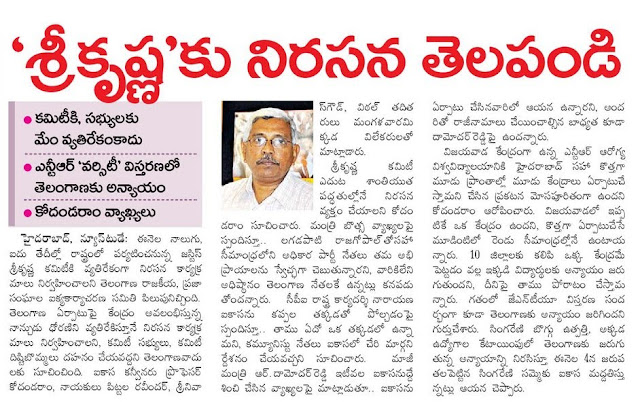 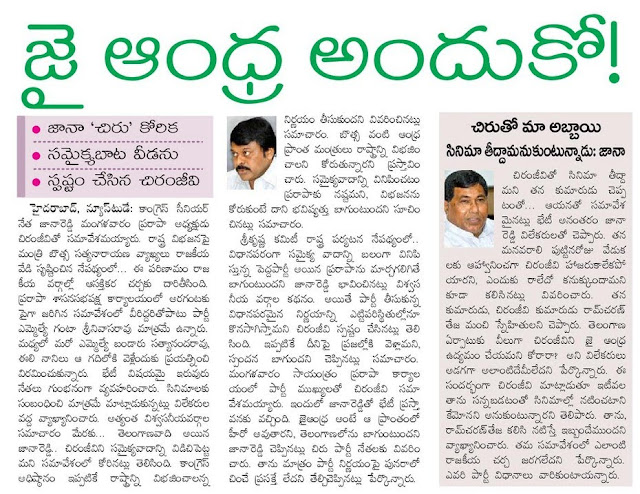 (source-eenaadu)
Posted by Gavini VN at 6:12 AM No comments: 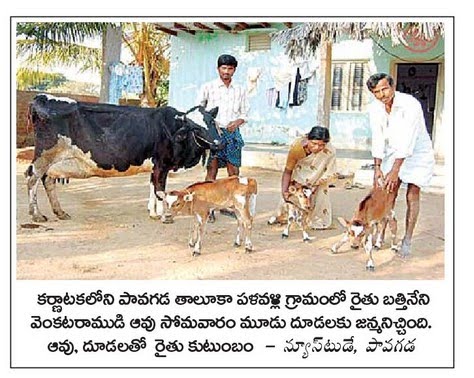 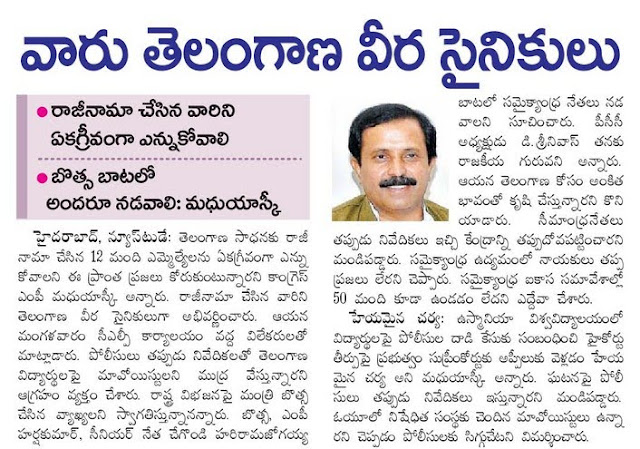 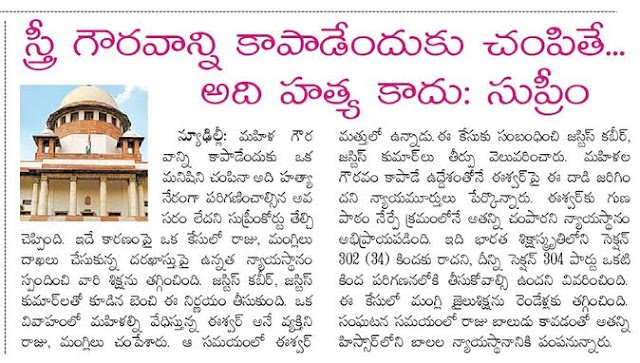 (source-eenaadu)
Posted by Gavini VN at 6:03 AM No comments: 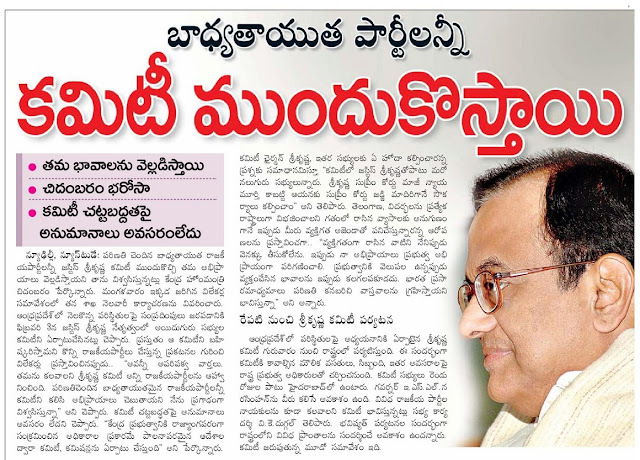 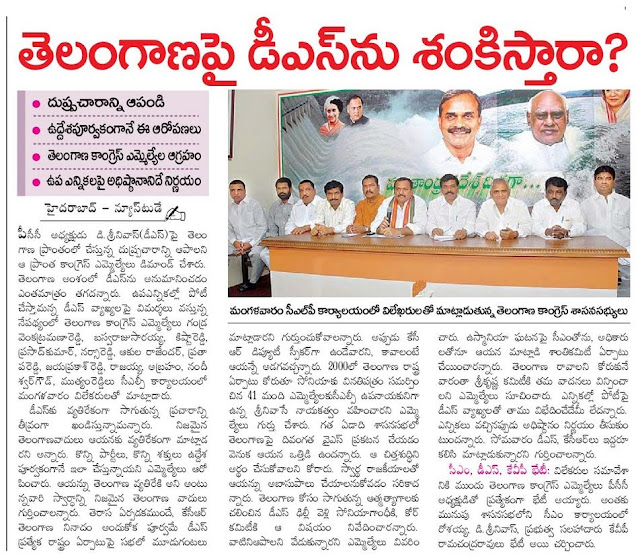 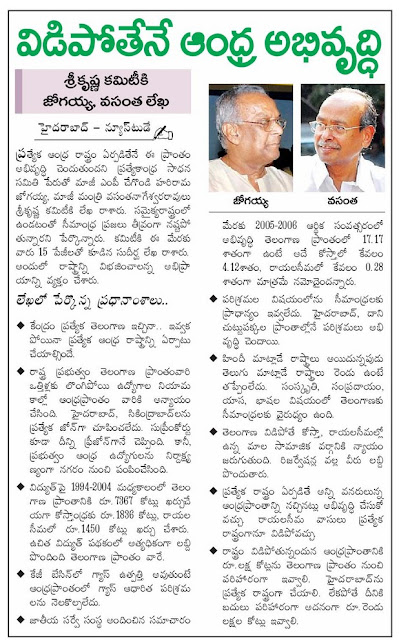 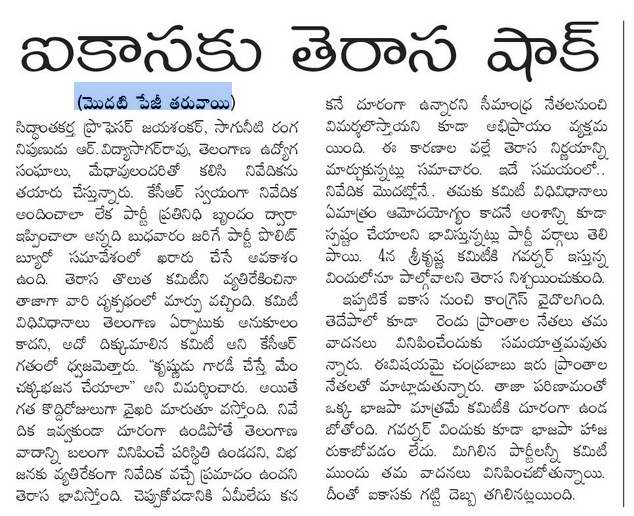 (source-eenaadu)
Posted by Gavini VN at 5:55 AM No comments: 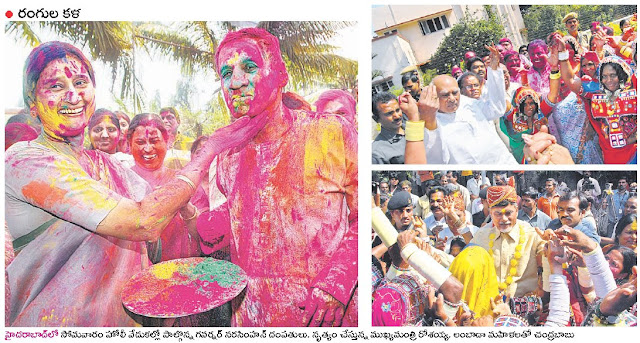 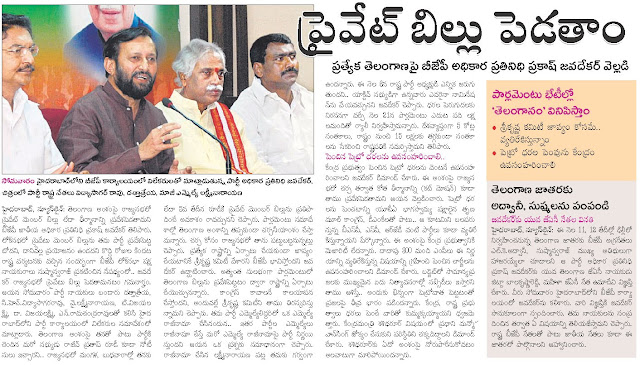 (source-saakshi)
Posted by Gavini VN at 7:02 AM No comments:

Kakinada: Advocating formation of smaller states,former governor of Sikkim and senior BJP leader V V Ramarao said the setting up of Justice Srikrishna committee is an exercise in futility. Speaking to reporters here on Monday,he said the contentious issue of Telangana needs a political decision and it does not require a committee to study the ground realities and the larger aspirations of the people of the region. He said there was no need to kick up a furore by the united Andhra activists over the remarks of minister Botsa Satyanarayana who pressed for the formation of separate T-state.Ramarao said there was a strong case for formation of smaller states in the country. He cited the examples of Gujarat, Haryana, Chhattisgarh and Uttarakhand which have made giant strides in development index.
=================================
Hyderabad soaks in Holi colours

Soaked in gulal and swaying to the tunes of Rang Barse, Hyderabadis trooped onto the streets of the city on Monday to celebrate Holi and as the day progressed,rang,bhaang and masti simply flooded all corners of the city. Almost in all pockets of Hyderabad,residential societies organised their own little dos.From the narrow lanes of Old City to the plush corners of Banjara Hills,the bright colours of Holi were visible everywhere.Vendors selling gulal and colours in Ameerpet were cheerful at the good sales this year.Said one of them,There was some enthusiasm among people last year too but this year the spirit is really high.People are buying colours in huge quantities. City old-timers said this time the festival was more of a social event.

It was mostly the youth who indulged in such festivities,not much of a family event, said S Manju a resident of L B Nagar.In the last 28 years,Manju says,this is the first time she saw people of her locality get together for the festival of colour.We have never celebrated Holi before.But now with a lot of our neighbours being from north India,we thought it would be nice to have a Holi gathering. While Mondays celebrations held centre stage with the city almost coming to a standstill due to Holi festivities,it was since Sunday night that the preparations for the festival had begun.This,some denizens said,was more surprising.While many played Holi even before,the concept of chhoti Holi (the day before Holi) is really catching up here.This year we saw several localities light kamadahan (bonfire) and celebrate Holieve, said Sudarshan Reddy,a resident of Somajiguda.He says that most residential societies around his place organised Holi parties on choti Holi itself.All the lanes were lit up.There were crackers and food and lots of bhaang.Even before it was Holi,celebrations in our areas had begun in full swing, said the IT professional,glad that he did not have to report to duty on Holi.The extended weekend added to the festivities for us, he said.

Even those who have been celebrating Holi the same way for the last many years,the intense zeal among their friends this year came as a surprise.We throw a party for all our close friends and family on Holi every year.This year,we had some friends coming up to us and insisting that we hold a gala do,assuring complete support.It was surprising, said Prakash Saxena,a resident of Banjara Hills offering his own explanation for the festival gaining popularity,Holi is one festival that promises a lot of fun and merriment.So,everybody wants to be part of it these days. Whatever the reason,it is sure that Hyderabadis are fast warming up to the festival of colours. 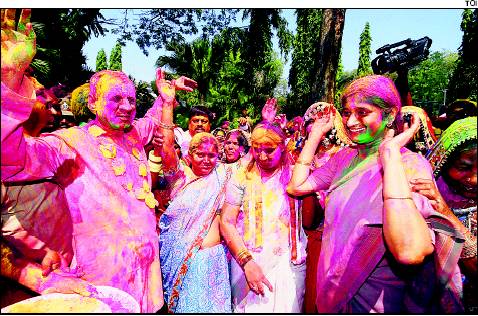 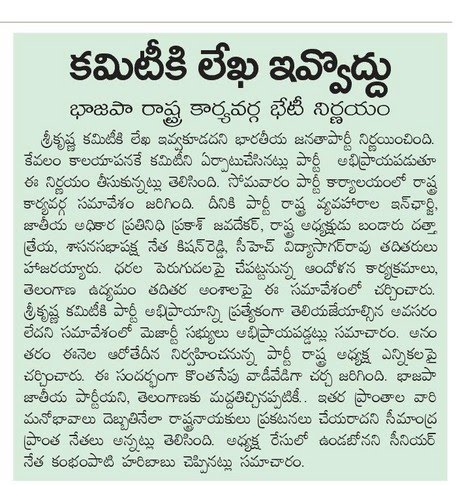 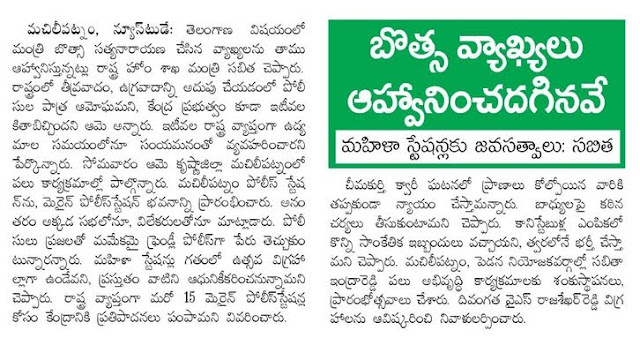 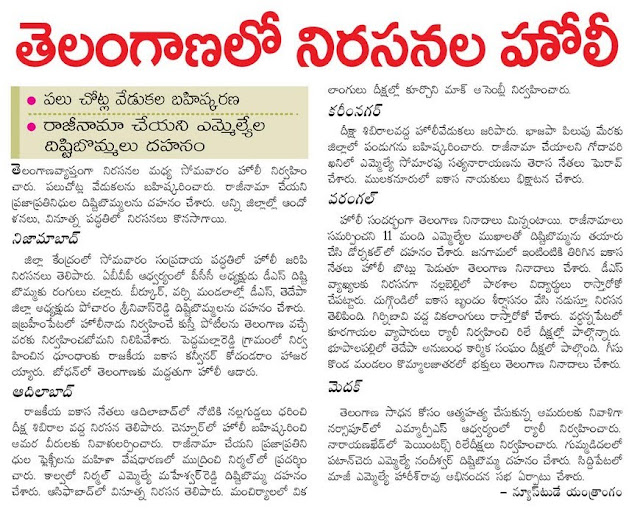 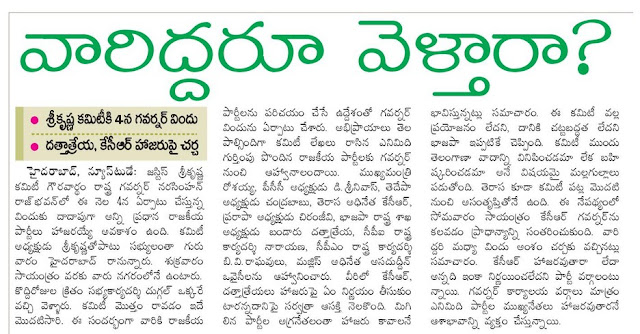 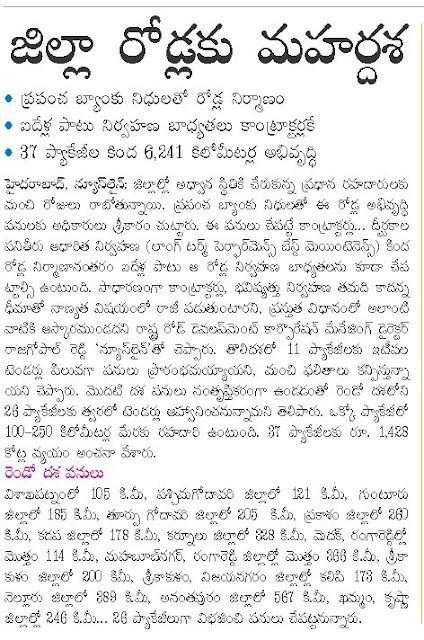